Glaucoma is a group of diseases that are progressive in nature. There is no cure for glaucoma, but with early detection and treatment, it is possible to slow the progression of the disease.

Often, glaucoma has no symptoms and can only be detected through a comprehensive exam performed by an eye doctor. If you are at an increased risk of glaucoma, your ophthalmologist may recommend more frequent eye examinations. 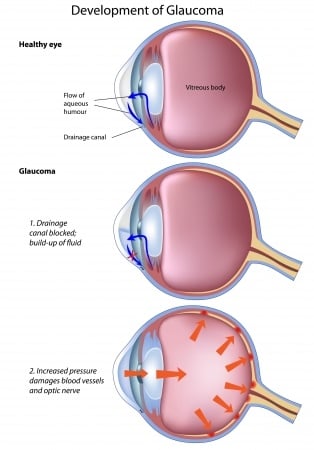 Types of glaucoma include:

Primary open-angle glaucoma – At least 90 percent of glaucoma cases are open-angle glaucoma and those affected are virtually symptom-free. Named for the drainage angle between the eye’s iris and cornea, which appears normal, or open, the condition is characterized by slow drainage through the meshwork of the eye. This causes intraocular pressure (pressure inside the eye) to slowly rise, eventually leading to damage of the optic nerve.

Angle-closure glaucoma – A less common form of glaucoma, angle-closure glaucoma is also called narrow-angle glaucoma. In this case the angle between the iris and cornea is narrowed or blocked causing a sudden increase in intraocular pressure. Symptoms include severe pain, redness of the eye, blurred vision and nausea. This is considered a medical emergency since, without prompt medical treatment, blindness can occur.

Pseudoexfoliation glaucoma – A type of open-angle glaucoma caused when material flakes off the outer layer of the lens, clogging the eye’s drainage system.

Pigment dispersion glaucoma – Pigment granules from the iris shed, blocking drainage canals in the eye and leading to a slow pressure build-up.

Uveitic glaucoma – Inflammation in the eye causes scars to form damaging the structures in the eye and interfering with drainage. Symptoms include pain, blurry vision, redness and light sensitivity.

Juvenile glaucoma – A rare, open-angle glaucoma that develops between the ages of 3 and young adulthood. Associated with a variety of genetic defects, many children diagnosed with juvenile glaucoma also have a parent with the condition. Symptoms include myopia (nearsightedness), tearing and light sensitivity.