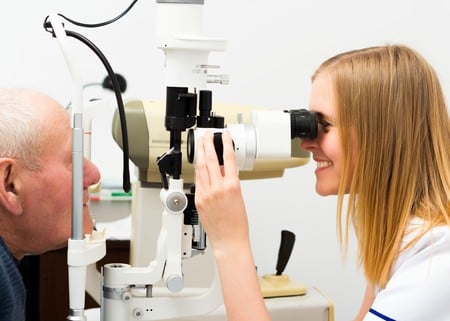 Glaucoma is a condition caused by increased pressure in the eye that can lead to optic nerve damage and ultimately blindness. Typically, fluid in the eye, also known as aqueous humor, drains out of the eye via a mesh-like channel. In glaucoma, this channel becomes blocked which increases the fluid levels and pressure in the eye. It’s unknown why this channel becomes blocked but hereditary links have been found, with parents passing this to children. Other known causes are trauma to the eye, chemical damage, severe eye infections, or blocked blood vessels in the eye.

What are the symptoms?

The most common symptoms with open-angle glaucoma are blind spots in side vision, or tunnel vision. Some symptoms associated with closed-angle glaucoma are severe headaches, nausea, vomiting, eye pain, blurred vision, halos around lights, and redness in the eye.

How is glaucoma treated?

Damage caused by glaucoma can’t be reversed but treatment to lower pressure in the eye can slow or prevent vision loss due to glaucoma, so early detection and treatment are important. Treatment usually starts with eye drops to help reduce pressure in the eye; however, if these don’t lower the pressure to the optimal level then oral medications may also be used.

Surgical treatment may also be used for glaucoma to create a new channel for fluid to drain from the eye. Microinvasive glaucoma surgery (MIGS) is a newer, minimally invasive procedure. Two MIGS devices are the iStent and Cypass. Both stents are placed at the same time as cataract surgery in patients with mild-to-moderate open-angle glaucoma and are undetectable after surgery.

Before you have surgery, your doctor will examine you to ensure you’re a candidate for MIGS and discuss different surgical options. The main difference between the iStent and Cypass are where the stent is inserted into the eye. Depending on your medical history, your doctor may feel one is a more appropriate option.

About the Author: Dr. David Yomtoob